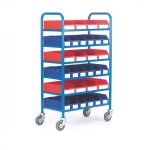 Why a container trolley will help with your DIY

DIY doesn’t need to be hard, but too many times it is harder

As government restrictions on working, leaving home, and on our movements in general

The World’s Most Environmentally Friendly Companies

When it comes to being environmentally friendly, how does your business measure up? In these times of scarcity of resources and money, thoughts are turning to going greener in a bid to protect our businesses, and our planet for the future.

Often businesses get a bad name when it comes to the environment. They are thought of as the polluters that exploit people and resources in equal measure. But there are some companies that are doing everything they can to show that business and a healthy planet are not mutually exclusive.

The Swedish furniture giant has made sustainability its mission at every level of the business, from sourcing half of the wood it uses from sustainable forests, to installing solar panels to power its stores. The company aims to get 100% of the energy it uses from renewable sources by 2020.

The household products giant has a sustainable living plan in which it’s set targets for itself for water and energy use, as well as the treatment of its suppliers and the areas in which it operates. Three quarters of the company’s waste doesn’t go to landfill and its CEO was awarded the Champion of the Earth award in 2015 by the United Nations.

The electronics company has lofty goals when it comes to efficiency and using renewable energy sources. It even moved its North American HQ from New Jersey to a building near Penn Station in Newark which eliminated the need for employees to drive to work. In Japan, it’s working with several companies to make a demo ‘Sustainable Smart Town.’

IBM has long been known as a sustainable business. Sustainability and corporate social responsibility has been part of its mission since the 1960s. The company has smart buildings which reduces the need for energy and water, and it uses sustainable procurement practices

Nike has not always had such a good press, but change has been happening in the clothing and footwear giant’s operations, and in a big way. It topped a list of the most sustainable clothing and footwear brands back in 2015, and it has focused on making its supply chain and production practices more sustainable. Aside from this, Nike is increasingly using recycled material in some of its products, reducing the amount of packaging it uses, and investing in becoming more energy efficient. The company is even partnering with NASA and other agencies to fund research into how to turn raw materials into goods without using as many resources.